Out of all the winners that were announced on the day, five (5) students from our school won “Top in Country” in various subjects. The students were interviewed, and they shared secrets to their academic success – and what most people don’t know about them. 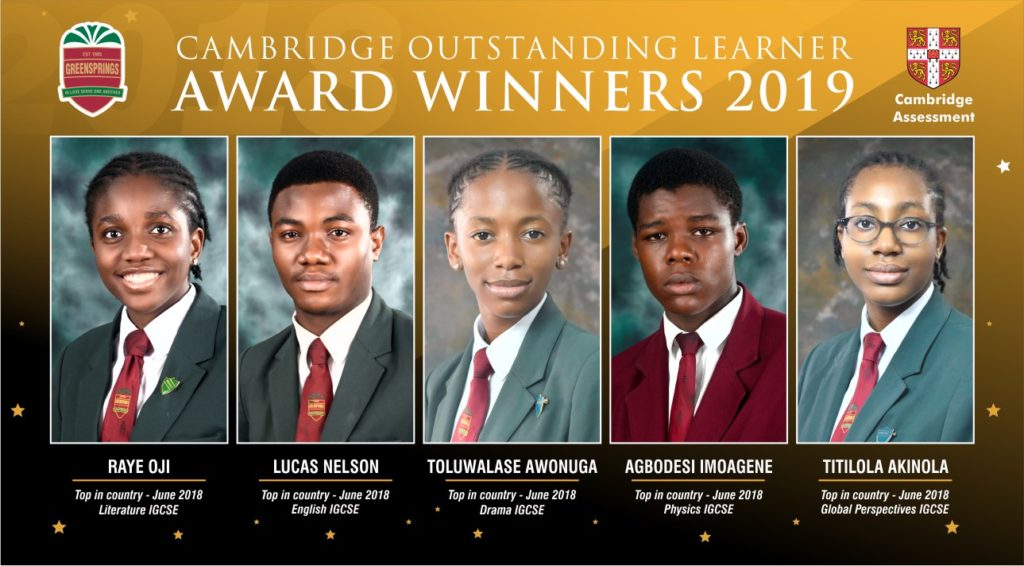 Lucas Nelson won the award for “Top in Country” in English. He joined Greensprings School in Year 3, and he is currently studying in African Leadership University, Rwanda. Though he aspires to become a professional sportsman, he also loves engineering.

While in school, Lucas was the Health Prefect, and when asked about the secret to his success, he attributed it to the constant encouragement from all his teachers – most especially his mother, who is also a teacher in the school. He also added that the eight (8) years spent in Greensprings helped him grow in confidence and prepared him towards becoming a winner of the Outstanding Cambridge Learner Award.

Toluwalase Awonuga has always had the dream of working in the theatre and movie industry – no wonder she won “Top in Country” in Drama. Her academic journey in Greensprings began at the preschool level; currently, she studies at McMaster University, Canada.

She was a prolific writer while in Greensprings and an active member of the female football team. Her favourite teacher was Mrs Adesanya, who constantly motivated and advised her whenever she was struggling with anything.

In her final year, she occupied the position of Social Prefect.

Like Lucas Nelson, Agbodesi Imoagene aspires to become a professional sportsman. He won the award for “Top in Country” in Physics, and that wasn’t a surprise as he was known to be good in calculations while in school. In fact, he had once represented Nigeria at the prestigious South Africa Mathematics Olympiad.

Agbodesi joined Greensprings at the preschool level, and along the way, he met Mr Ogunmola, his teacher who contributed positively to modelling him for success.  As for how he was able to come top in Physics, he gave the credit to the constructive discipline culture of Greensprings School. Agbodesi is currently undergoing a sixth-form programme, in preparation for life in the university.

The 2018 Outstanding Cambridge Learner Award for “Top in Country” in Global Perspectives was given to Titilola Akinola. She joined Greensprings at the preschool level, and currently studying at Durham University International Study Centre in the United Kingdom.

Being a prolific public speaker, Titilola was chosen to hold the role of Academic Mentor for her set. And on the graduation day, she won the school’s Principal’s Award for Independent Learning and Research.

According to her, the secret to her academic success is in the independent thinking ideology encouraged by Greensprings School. Besides, she believes in studying hard and playing hard.

Raye Oji won the “Top in Country” award in Literature. She is very concerned about the Nigerian public health; therefore, her aspiration is to study Biomedical Sciences so that she can gain the knowledge and skills to make a difference. Raye joined Greensprings School at the preschool level, and in her final year, she was elected the Library Prefect.

On the secret to her academic success, she said she was very grateful to be taught by the kind of teachers in her school. She remarked that from her preschool days till when she finished in secondary, she had been taught by many impactful teachers who set her up for this great accomplishment.